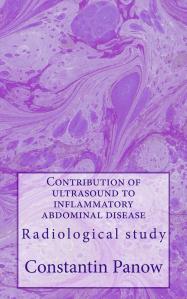 Ultrasound has been imaging modality of poor man since 50 years. With computer revolution it has acquired exquisite quality at turn of century. Its nowadays capabilities have not yet been fully recognized and described.

1985 I put up a statistics at the Gastro-enterology Department of University Hospital of Geneva for Professor Edouard Loizeau, Director-in-chief of this Unit at that time.
This survey covered gastro-duodenal ulcer disease diagnosed by endoscopy over two or three years.
The results were astonishing for me: – In the acute phase an isolated ulcer (10%) was seldom observed.
An erosive inflammation (90%) of pre-pyloric gastric antrum (antritis), or duodenal bulbus (bulbitis) were witnessed instead. On many occasions called hemorrhagic by the gastro-enterologist performing the procedure.
It lasted many decades untill ultrasound was able to provide reliable images showing this aspect.
When disease persists without treatment, then a tiny ulceration appears in the wall of the gut.
This one again is readily visible with modern echography.

My publications are available on http://www.AbeBooks.com, http://www.payot.ch and other Bookstores and Libraries.