A. This unique medical entity has always been considered most lethal illness ever!

Hence compressive stockings sold in any airport in the World and abundant drinks distributed by all aviation companies during a flight.

In fact, you would ask, as a first question about this topic:

B. Only 10-20% of thromboembolism is massive, that is declared as acute;

– And lethal in 30% of cases at first occurence;

– Or in case of recurrence, with about the same rate.

Analysis of data considers such an event as thrombotic material produced by human body of about 50-60 ml, or more, per day.

People die in such a situation simply by a vaso-vagal schock;

Due to extensive blockage of pulmonary arteries (>50-75% of lung arteries).

This situation is easily established clinically, because of elevation of D-Dimers in blood.

(Which is significant in most cases).

C. The problem is, that in 70-80% of cases, especially concerning elderly people with this disease, production of thrombotic elements is modest;

Frequently in vicinity of 20 ml per day, or even less, which stays in limits of chronic thromboembolism, and concerns only calf veins.

This situation, in contradistinction to first one described, is immediately lethal in less than 3-5% of cases.

But promote, on the contrary, a chronic state in lung tissue, which is called pulmonary arterial hypertension.

– Which would kill the elderly patient in a few months or years!

Once declared irreversible from the stage of chronic vascular lesions onward (Plexiform lesions in lungs);

We know now, that with appropriate treatment, it is not only treatable, but also reversible in almost all stages of evolution.

D. Unless, you have to deal with overwhelming hypercoagulable state.

There are two big groups of a hypercoagulable state in advancing age;

– 2. And tumors of many different origins.

– Due to autoimmune gastritis, which limits with time secretion of intrinsic factor, essential for absorption of this vitamin in distal small bowel.

(Underestimated because of variability of manifestation of its deficit in population and inefficient methods still in use for its diagnosis).

Main promoter not only of peripheral neuropathy, but also of progressive degeneration of dorsal columns of spinal cord, which not infrequently condemn elderly people to a roll-chair and a specialized home.

Demonstration of Vitamin B12 deficit in laboratory medicine is easy:

– 1. Determine level of homocysteine in blood!

– 2. Inject sub-cutaneously one dose (100 microgrammes are enough, but one vial would also do the job, which is 1000 microgrammes) of Vitamin B12;

– 3. And determine again level of homocysteine in blood one month later!

– 4. If you observe level of homocysteine in blood decreasing by more than 10-20% in relation to first analysis, you have the proof, that there is deficit of Vitamin B12 in that person!

He, or she, needs parenteral substitution of this stuff once per month, or at least once every 6 months (According to approximate amount of this vitamin stored in liver).

– D-Dimers declared by all authority as gold standard for diagnosis of thromboembolic disease,  are significantly elevated only in first case discussed:

– They are of diagnostic value only in acute stage of disease!

– Chronic situation, which is prevalent (almost 80% of cases) does not elevate significantly their level in blood, as amount of thrombus produced in calf veins does not exceed 20 ml per day.

Diagnosis of this last situation:

– It is easy with dedicated specialist:

– Be it with Ultrasound of calfs;

– Or with Angio-scanner of lungs.

– Without treatment, as discussed previously, as any single disease in fact;

– This ailment is not invariably fatal!

– Not in order to kill the patient!

As any beginner in Medicine would pretend.

– But aiming at clearing this pathological tissue from the body, as lungs produce lytic enzymes, able to dissolve it!

(Usually without leaving a trace of it within weeks).

– Calf pain and swelling of ankle.

– Dyspnea (difficulty of breathing at rest or on exercise), and tachycardia (fast heart action, fast pulse), and chest pain on breathing.

I. Caution: This short text is not implemented to avoid consultation of your house doctor or specialist, but rather to bring you to this authority in case of suspicion of this common disease!

– Aiming also at better information and orientation about this complex disease, provided for patients and medical practitioners, as well. (As professional litterature present is abundant, but frequently confusing! )

– Simplicity of text is on purpose, for means of understanding basic frame of disease. 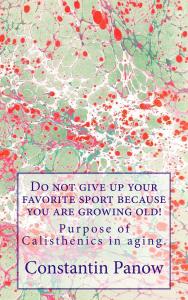 You can find my books at http://www.AbeBooks.com and in other bookstores and libraries.